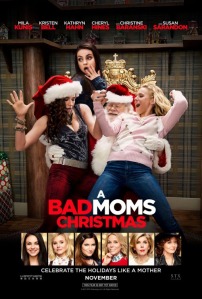 The first movie wasn’t innovative in any way, but I had a blast watching it. If you did as well, you’ll feel cheated after watching this God-awful sequel. “A Bad Moms Christmas”, as you might have guessed, is basically set around the holidays and features the same cast from the first film, except they’re not funny anymore. How to make things worse? You bring in their own mothers for extra stupidity, and throw in every nasty joke in the book. Hilarious huh? Mila Kunis, Kristen Bell and Kathryn Hahn still feel underappreciated, especially during the holiday, so they decide to go crazy once again. You get my point. We’re getting more of the same, but less of the impact. Jokes that fall flat? Check. Characters that will make you cringe? Check. A stupid plot that gives Christmas movies a bad name? Double check. These bad moms are way past their sell-by date. One sip of this nasty product and you’ve had enough already. I know I have.