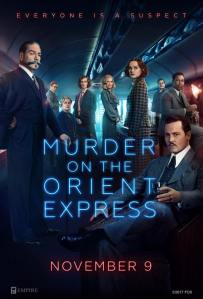 To say that this version of Agatha Christie’s beloved novel “Murder on the Orient Express” surpasses the 1974 film (at least in my eyes) would be an understatement. While its predecessor had an all-star cast, it also had its problems, chief among them a slow pace. That’s not to say that Kenneth Branagh’s movie is flawless from start to finish, but I had more fun watching it. In recreating Christie’s most famous murder case, Kenneth Branagh hits all the right notes, playing world-famous Belgian detective Hercule Poirot, who must investigate the death of a man who was murdered on the Orient Express. The film also features an all-star cast, which includes Michelle Pfeiffer, Willem Dafoe, Johnny Depp, Josh Gad, Penelope Cruz, and Dame Judy Dench. Everyone’s a suspect, of course, and if you’ve never read the book (I doubt that), the movie has that ability to keep you guessing at every turn. The only thing that doesn’t work in this otherwise enjoyable film is the lack of suspense in the third act. But when a film has entertained you and held you in its grip so long, you may be willing to forgive its shortcomings. After all, who doesn’t love an old-fashioned murder case?