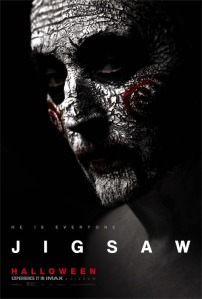 I can  picture a studio meeting in Hollywood: “hey why don’t we revive the “Saw” franchise? It’s been 7 years since “Saw VII” (supposedly “The Final Chapter”) hit theaters and it’s time to bring back Jigsaw to the big screen. That’s a brilliant idea! The suckers who paid money to see all the forgettable sequels will swallow this one as well and we can kick-start yet another trilogy (or franchise at this stage)”. And thus “Jigsaw”, the 8th installment in this endless series was created. I sound like I’m complaining, and perhaps I am. As someone who fell in love with the first film back in 2004 (it was directed by horror master James Wan, enough said), I expected a bit of effort from the people behind this mediocre attempt at reviving this series. 7 years is more than enough to cook-up something half decent. Not a chance, as the film is pretty much more of the same: a series of murders are taking place, and all clues lead to…you guessed right…Jigsaw (Tobin Bell), who’s been dead for a decade. How could it be? That’s probably the most intriguing aspect about the movie. Everything else, from the cat and mouse game to Jigsaw’s games, are generic at best. Even the final twist isn’t as shocking as the writers think it is. Too bad. They waited 7 years to make this film. Let’s just say that it wasn’t worth the wait.