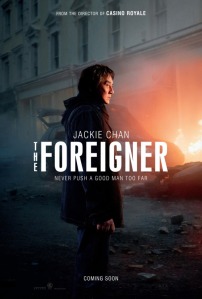 A bomb goes off in London. Jackie Chan’s daughter dies in the blast. He wants answers from a British government official (played by Pierce Brosnan), who may or may not know the people behind the terror attack. Brosnan refuses to cooperate (naturally), and all hell breaks loose (naturally). That’s “The Foreigner” in a nutshell, a tense and surprisingly entertaining thriller from director Martin Campbell (“Casino Royale”). Chan could play this paycheck role in his sleep, but he gives it something extra as a man with absolutely nothing left to lose. Brosnan is equally good as a corrupt government official with a terrible past. Campbell stages some pulse-pounding fight scenes, mainly involving Chan, who is still on top of his game at 63. The plot gets convoluted and way too political for my taste at some point, but Chan and Brosnan keep it afloat. To wrap it up: Is “The Foreigner” original? No? Does it get the job done? You bet. And I have to admit: watching Jackie Chan kicking ass brings me so much pleasure.