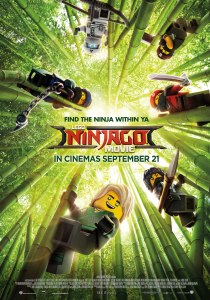 It’s not “The LEGO Batman Movie”, but “Ninjago” has enough charm and memorable characters to justify its own feature film. Justin Theroux may have found the role of his career, voicing the evil Garmadon, an ego-centric villain who may remind you of a certain Darth Vader. His plan? To take over the city of Ninjago. Garmadon also has a son, Lloyd (a hilarious Dave Franco), who is tasked to defend the city, along with 5 other teenage ninjas. And who better than Jackie Chan’s Master Wu to train them? The kids are gonna love it, even when it gets hectic at times. As for grown-ups, there’s plenty to enjoy here, including some pop culture references and hilarious one-liners. Even when the movie spins out of control, it’s still a family-friendly environment that rises on its own goofball spirits. Theroux steals the show, naturally, but everyone gets the chance to shine in this funny and entertaining addition to the LEGO cinematic universe. Sign me up for more!