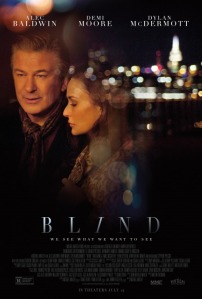 “Blind” defines cheese. It does offer Alec Baldwin with a juicy role and it’s always good to see Demi Moore back onscreen, but the story itself ranges from absurd to absolutely preposterous. I don’t know what first time director Michael Mailer was hoping to extract from this surprise-free script, but there isn’t much to recommend here. Baldwin, who truly saves this movie from being a complete waste of time (and money), plays a novelist blinded in a car crash who meets and falls in love with the wife of an indicted businessman. The chemistry between the two leads is reminiscent of 90’s romantic dramas, but the problem is in the script itself, which chooses corny over challenging at every turn. You can basically see the ending coming a mile away, drowning a good cast in a sea of clichés. It’s still surprisingly watchable, but not enough for me to recommend it on the big screen.