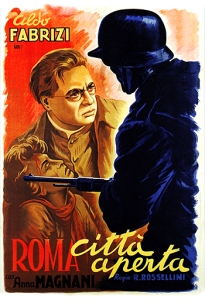 Italian filmmaker Roberto Rossellini kicked off his so-called “war trilogy” with “Rome, Open City”, a harrowing look at Rome during the Nazi occupation of 1944. Though the events that take place in the movie are strictly fictional, Rossellini knows exactly how to deliver an authentic experience. The main character here is Don Pietro, an Italian priest who finds himself helping the leader of the resistance, Giorgio Manfredi, who is wanted by Nazis. Rossellini builds up tension as we follow these character’s journey into the unknown. The mood and atmosphere of the movie are reminiscent of American film noirs of the early 1940’s, and that’s probably one of the main reasons why I loved this movie so much. Rosselini does a fantastic job in capturing WWII Rome with a dreadful mood, keeping his audience on the edge of their seats from start to finish. If you want to watch a master at work, I highly recommend “Rome, Open City”.