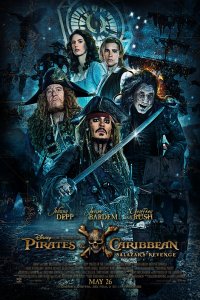 Quick recap: I loved “The Curse of the Black Pearl” back in 2003, enjoyed its sequel “Dead Man’s Chest”, absolutely hated “At World’s End”, and didn’t mind “On Stranger Tides” so much. One thing these sequels had in common is that they were “more of the same”, only less likable than the original. And that’s exactly how I felt after watching the fifth installment “Salazar’s Revenge”, also known as “Dead Men Tell No Tales” in the U.S. That won’t stop audiences from turning the new one into a hit, but for me, this series remains a typical Hollywood money making machine that never truly took off after the first film. But at least I can start on a positive note: Johnny Depp is still fun to watch as Captain Jack Sparrow, and I especially enjoyed seeing Javier Bardem as the movie’s main villain: Salazar. His motive? To kill Jack Sparrow, of course. Wait, did you expect something more original? I didn’t. Along the ride, we meet a lot of newcomers, including Brenton Thwaides as Orlando Bloom’s heir and Kaya Scodelario as a woman with secrets of her own. And it’s always a pleasure to reunite with Geoffrey Rush’s Barbossa. There’s also too many subplots, endless action scenes, and enough humor for two movies. All I can say is that after a fun first half, “Salazar’s Revenge” turned into an endurance test, and I couldn’t wait for it to end. That would happen, I suppose, when you rely too much on visual effects and give little attention to the story. Will this installment still satisfy faithful fans? I suppose so. Personally, I’d rather see Johnny Depp tackle different projects than waste his time on another one of these sequels. If that puts me in the minority of moviegoers, so be it. As much as I enjoyed “Pirates of the Caribbean” over a decade ago, I don’t care much for it anymore.