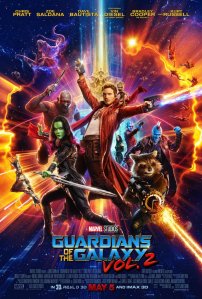 Guardians of the Galaxy fans would hate to admit it, but Vol. 2 is a mess. An enjoyable mess, but a mess nonetheless. I know it must have been hard for writer/director James Gunn to cook up a sequel to the hugely entertaining first film, but I think that he hasn’t fully succeeded this time around. On the surface, Vol. 2 is exactly the same; non-stop action sequences with the same loopy humor that made the first one so successful. And do I have to mention how awesome the soundtrack is? But the whole thing feels like an excuse for a film rather than a story that wanted to be told. In this installment, we learn more and more about Peter Quill’s past, as he tries to reconnect with his long-lost father (Kurt Russell, doing what he does best). There’s also too many subplots, and that’s part of the movie’s problem. Halfway through “Vol.2”, which runs close to 140 minutes, my mind started to wander. Instead of being pulled into this world I felt myself drifting away from it. That’s not to say that the movie doesn’t have some kick-ass moments, mainly involving Kurt Russell, who gets all the best moments in this lengthy Volume. And Chris Patt is still perfectly cast as Peter, Dave Bautista is in fine form as Drax, and baby Groot couldn’t be more adorable. For Guardians fans, the mere presence of these characters, along with some eye-popping visual effects and action scenes may be enough. For me, the finished product lacks originality and simply doesn’t know when to quit. I still admire James Gunn’s vision and wish him nothing but good luck for Vol. 3, but his light touch from the first film is sorely missed here. More isn’t always better and this movie is proof of that.