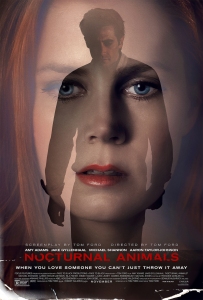 I’m ashamed to say that I’m a bit late coming to this movie, but having witnessed Amy Adams in one of the best performances of her career in Denis Villeneuve’s masterpiece “Arrival”, I couldn’t wait to sink my teeth into “Nocturnal Animals”. And I wasn’t wrong: this is a scary, stylish, and terrifically twisted film noir from the artist known as Tom Ford. Adams plays Susan Morrow, a gallery owner in Los Angeles who receives a mysterious manuscript from Edward (Jake Gyllenhaal), the ex husband she dumped two decades ago for another man. The novel is dedicated to her, and tells the story of Tony (Gyllenhaal, once again) on a nightmare trip with his wife and daughter. This is terrifying stuff, and as both stories unfold, dark secrets are revealed, leading up to an ending that is open to interpretation (be my guest). But it isn’t merely the mystery that makes “Nocturnal Animals” so immersive: it’s the way that director Tom Ford sets up his story and peels away its secrets, one layer at a time. Another great aspect is the characters themselves: getting to know them one by one gives the movie its emotional force. Even when Ford is overreaching, his passion burns through. In only his second feature as a director, he has managed to craft one of the most unique films of 2016. You can’t possibly miss that.