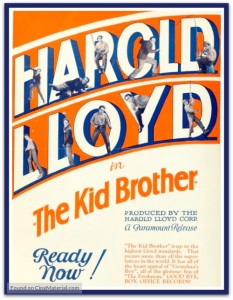 Today I take a trip down memory lane. One of my earliest memories was watching “Harold Lloyd’s World of Comedy”, a compilation of silent comedian Harold Lloyd’s very best moments. Lloyd actually edited the film himself, in 1962, exactly 40 years since his first feature film “Grandma’s Boy” was released. But there’s no doubt in my mind that his most famous shot came in 1923, when his character found himself hanging from a clock, 12 stories above the city street. Then came “The Freshman” in 1925, another masterpiece about a college freshman who can’t seem to cope with his new environment. But somehow, it was a scene from his 1927 film “The Kid Brother” that was forever engraved in my mind. In it, Lloyd finds himself taking on a bad guy aboard a steamboat. As a kid, that scene scared the shit out of me. As an adult, it still amuses me. The son of a local sheriff, Lloyd’s “kid brother” has to prove himself as a “man” when outsiders threaten to take over the peaceful town. As usual, Llyod throws in one hilarious gag after the other, something that was very common in his silent comedies (he tried to emulate that in his talkies but didn’t quite succeed). As a result, the movie is still a treat to watch, almost a century after its release. If you’re still discovering silent comedies, you can’t go wrong with “The Kid Brother”. It’s one of the funniest movies of the silent era and one of Llyod’s very best works.