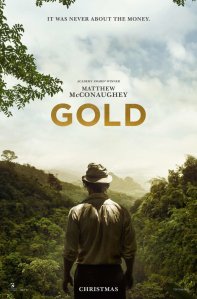 I can’t imagine anyone other than Matthew McConaughey in the role of Kenny Wells, a Nevada prospector who teamed up with a mining engineer in the 1980’s to dig for Gold in the uncharted jungle of Indonesia. McConaughey is fully committed to his role, transforming himself once again, both physically and mentally. I’d call the final result a mixed bag, with memorable scenes followed by dull patches. The cast is surely not at fault. McConaughey is supported by a first-rate cast, including Edgar Ramirez and Bryce Dallas Howard. Director Steven Gaghan does a fine job in bringing this more-or-less interesting story to life. I just wish the narrative wasn’t so uneven. And after a while, it was hard for me to remain focused and stay connected to this peculiar character and his cause. Would I still recommend “Gold”? McConaughey’s performance is worth the price of admission alone. But you must know that you might or might not respond to the movie as a whole.