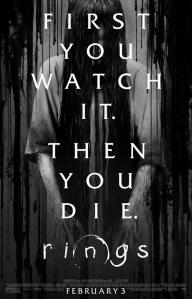 It’s the curse of the horror sequels and reboots. You get one or two decent films and the studio decides to fuck it all up by releasing one pointless sequel after the other (I’m looking at you, “Saw” and “Final Destination”). I’m a huge fan of the original Japanese film “Ringu”, and I welcomed its 2002 American remake starring Naomi Watts with open arms. These movies were terrifyingly good and they still entertain audiences, even after all these years, which is more than I could say about the dreadful “Rings”, originally scheduled for a November 2016 release (They just knew it was bad). If you’re familiar with the “Ring” movies, then you probably know the drill: There’s a mysterious tape that several people watch. Random images appear on screen. They receive a phone call from a girl telling them that they have seven days to live. And voila. Intriguing? Of course it is. That’s what hooked us up to begin with. But what clicked over a decade ago clearly doesn’t anymore. The cheap thrills in “Rings” wear off way too fast, and we’re left with bad acting, cheesy writing and a stupid ending that only opens the door to more sequels. The year is still young, but this could well be the worst horror movie of the year. And coming from a huge “Ring” fan, this ranks as a major disappointment.