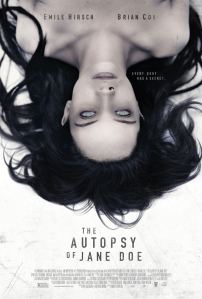 Up until the crazy climax, this horror movie starring Emile Hirsch and Brian Cox allows Norvegian director Andre Ovredal to earn his stripes as a master of terror. He does a fine job at creeping the hell out of us, telling the story of a father and son who work as a team of coroners at the morgue (how cheerful!). It’s just another night at the morgue, up until they receive the unidentified body of a girl who was found buried in the basement of the home of a brutally murdered family. How did she get there? That’s the hook that will lead you into “The Autopsy of Jane Doe”, an atmospheric horror flick that earns its scares the old-fashioned way. Predictable stuff? You’d think. But the “autopsy” tricks would grow tiring without actors who perform well beyond the call of duty. Cox makes a sympathetic figure out of a bruised man who still can’t get over the death of his wife. His scenes with the talented Hirsch have a touching quality that I found damn near irresistible. It’s these two actors who make something haunting and memorable out of a movie that shouldn’t work as much as it does.