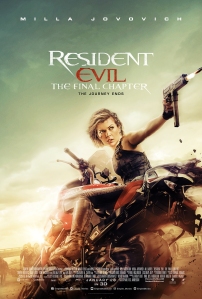 Nobody expected a masterpiece, but director Paul W.S Anderson’s failure to end this series on a high note ranks as a major disappointment. There’s literally nothing new here, only one merciless action scene after the other as Alice (Milla Jovovich) tries to put an end to the Umbrella Corporation once and for all. Will she? Obviously. They named this installment “The Final Chapter”. Let’s hope it really is.