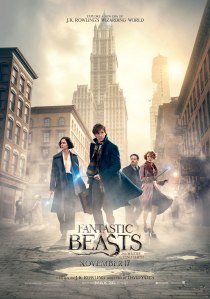 Little did I dream when I first encountered the magical world of Hogwarts some 15 years ago (wow has it been that long?) that I would become so attached to Harry Potter and his friends, and enjoy the experience of revisiting this world every couple of years. “Now what?” was my first reaction when “Deathly Hallows part 2” ended. The answer, of course, is in “Fantastic Beasts”. By emulating the look and feel of the Harry Potter movies, writer J.K Rowling (who wrote the screenplay) and director David Yates (who directed the last four Potter films) have managed to deliver another unique movie-going experience for die-hard fans and, dare I say, newcomers as well. Is it visually stunning? You bet. Is it entertaining? In ways you don’t see coming. The events of this story take place some 70 years before the battle of Hogwarts, in which Lord Voldemort was finally defeated. We’re in New York and we’re about to meet Mr. Newt Scamander (Eddie Redmayne, in a role he was born to play), a British wizard/writer who spent most of his life traveling the globe and collecting different kinds creatures. Where does he keep them? In his leather suitcase of course. The plot truly kicks off when Scamander loses his suitcase and the “beasts” are unleashed all over the city. In terms of plot, it wouldn’t be fair to reveal more. But for a movie that’s supposed to introduce a whole new cast of characters, “Fantastic Beasts” does so brilliantly while delivering one of the most visually stunning experiences you’ll ever see. But it’s the underlying mythology that J.K Rowling created in her books some 20 years ago that truly fuels this Spin-Off. Not to mention the presence of James Newton Howard’s enchanting music, which is a constant reminder of what captured our imagination in the original series. Ultimately, Rowling has maintained her integrity, and “Fantastic Beasts” dazzled me from start to finish. This is an achievement that will stand for years to come.