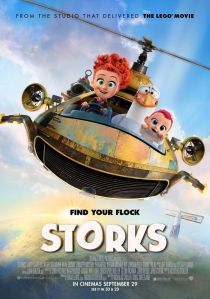 As someone who had no idea what to expect from this animated feature, I actually left the theater with a smile on my face. This movie is a treat for kids (the screening I attended was packed with kids and they all cheered and applauded at the end) and, I daresay, for adults as well. Part of its success is in its fast-paced scenes. From the very first moment I knew I was in for a roller coaster ride. So what’s it about? Storks who deliver babies. Or at least they used to. Now they just deliver packages for global website Cornerstone.com. Enter our “hero” Junior (voiced by Andy Samberg), who accidentally activates the baby machine again and has to deliver a newborn baby before his boss (voiced by the great Kelsey Grammer) finds out. The movie, directed by Nicholas Stoller  and Doug Sweetland, has so much energy it sometimes spins out of control. No worries. It’s the characters that matter most, and the film makes us care what’s going to happen to Junior and his friends. It might not be the best animated movie of the year, but it gets the job done by delivering non stop entertainment. That’s pretty good stuff.