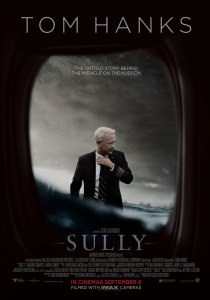 “Sully” marks the first time director Clint Eastwood and Tom Hanks have ever worked together on a film, so naturally, expectations were more or less high. The result is superior moviemaking, and a powerfully emotional experience from start to finish. Based on a true story that happened on January 15 2009, the movie focuses on Captain Chesley “Sully” Sullenberger’s successful attempt at landing a passenger plane in the Hudson river, saving the lives of all 155 people aboard. But despite that pulse pounding plane crash scene (I had to take a deep breath once it was over), “Sully” is neither an action film nor a showcase for special-effects (although I’m sure they would look damn impressive in IMAX): it’s a portrait of a man who did not follow standard procedures, and still managed to save everyone aboard. Casting Tom Hanks as the title character couldn’t be more credible; he’s a terrific actor, and watching him face the media circus in the aftermath of the “crash” resonates more than it might have with another actor in the part. Director Clint Eastwood has chosen to tell his story in a non linear fashion. In the hands of a less skillful director, it could have been a disaster, but it didn’t bother me in the slightest here. In fact, it made me more immersed in the story as I admired Todd Komarnicki’s thoughtful screenplay. As we come to the end of a summer filled with escapism, it’s refreshing to encounter an adult drama with an A-list cast. And with Eastwood calling the shots, you know you’re in for one hell of a ride.