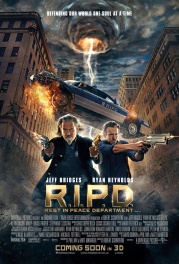 It was a huge flop at the box office, critics destroyed it (they said it was too much like “Men in Black” but then again so what?), and the audience didn’t bother to see it. And yet “R.I.P.D” wasn’t as bad as I expected it to be. It’s not an unprecedented success (far far far from it)  but it’s an entertaining movie. What the ads promise, the movie delivers as we follow two dead law officers, Roy (Jeff Bridges) a lawman from the old west and Nick (Ryan Reynolds) a modern day Boston police officer. Both have been killed in the line of duty and were hired by the Rest In Peace Department following their death. Their mission is to go back to earth an earn redemption by catching the “undead” who turn into ugly monsters when attacked. And that’s it for plot. What works like comic hellfire is the casting of good old Jeff Bridges who is spot on and very funny at times. The effects are cheese-whizzy fun, but it’s the unexpected chemistry between the two leads that makes “R.I.P.D” go down easy. Director Robert Schwentke (“Red”, “Flighplan” ) doesn’t so much direct this movie as load it with cool stuff to make it look fancy. As summer escapism goes, you could do worse.